Not everything that has been planned by Atlantean Publishing has gone to press, or in its originally planned form. These unfortunate projects have struggled to see the light of day:

Additionally, towards the end of Atlantean's second (greatly distended) 'year' of publishing Monomyth, there were plans to anthologise all the multi-part serials printed in the 'zine thus far, which were originally run across several issues apiece; those from the first year would be collated in a volume entitled Through A Broken Looking Glass, and those from the second in Tangled Dreams. These were advertised, with their intended contents given, in Monomyth 20 and Monomyth 21, in the same 'upcoming releases' schedule as suggested both The UNIT Years and Ten Of The Best...Short Stories (above) were also imminent. All fell foul of the Great Monomyth Hiatus, as too did Green Goblin, though the serials and short-stories collections remained provisionally on the drawing board for some time even after this, to little avail. That release schedule was evidently not a lucky list to appear in! 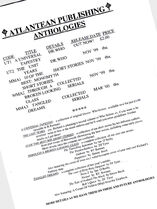 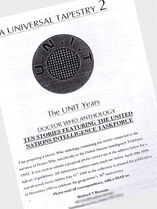 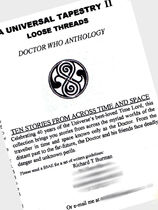